We will never see this person again. these representations of art and sculpture are all that remains of this person. Ruler more than a thousand years ago lived in Egypt. 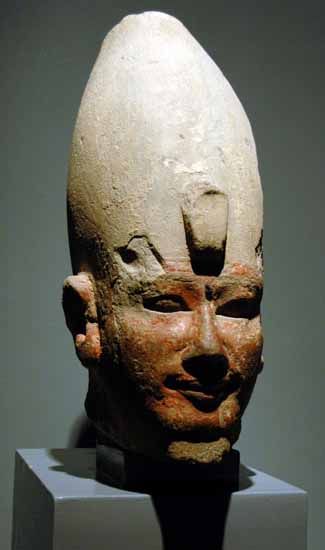 Amenhotep I was the son and successor of King Ahmose, the founder of the XVIII Dynasty. The few records found about his 13-year reign testify him as a successful ruler who achieved great results in foreign policy and removed the threat of an Asiatic invasion into Egypt forever. He pursued the enemy forces far into the north, possibly also to the east, where he may even have crossed the Euphrates. Similarly in the south, according to a statement by his successor, Egyptian forces penetrated as far as the Third Cataract, to remove the threat of Nubian attack.

After his death, he shared a mortuary temple, and possibly a tomb, with his mother, though the tomb’s location is unknown. 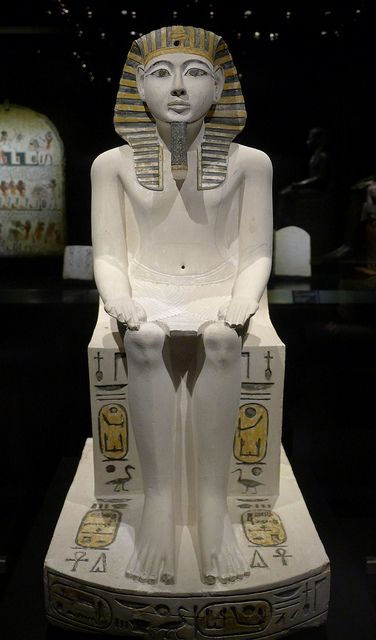 Amenhotep I, the son of Ahmose I and Queen Ahmose Nefretiri, was the second king of the 18th Dynasty. He may have ascended to the throne at a relatively young age, for an elder brother had been designated as heir only about five years earlier. He may have even served a brief co-regency with his father, however. He evidently carried on many of the practices of his father, and his mother certainly played an important part in his reign, acting as God’s Wife of Amun. Amenhotep I may have been married to his sister, (Ahmose-) Merytamun, who was a God’s Wife of Amun.

The king is represented as Osiris.  The statue was set up a 11th Dynasty temple and its style is believed to have been influenced by the sculptures of this earlier period.

The classic pose of OsirisAfter the construction of the mortuary complex of Nebhepetre Mentuhotep II (2055-2004 BC) in the Eleventh Dynasty (about 2125-1985 BC), the area of Deir el-Bahri became a holy place. This statue comes from a temple set up there by Amenhotep I (1525-1504 BC). It shows Amenhotep as Osiris. The temple itself was probably dedicated to the particular form of the goddess Hathor who was revered at Deir el-Bahri. Relatively little is known about Amenhotep’s temple, since it was dismantled when Hatshepsut (1479-1457 BC) started work on her own mortuary complex at Deir el-Bahri. A number of statues such as this were probably placed at the entrance to Amenhotep’s temple, and when the temple was dismantled they were apparently moved to the site of the Mentuhotep temple, where they kept company with the statues of Senusret III (1874-1855 BC), placed there at a much earlier date. The history of this statue is evidence of the respect sometimes shown by one king to a predecessor when it was necessary to move a structure. 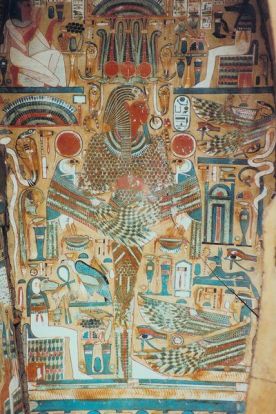 An attractively presented guide to ancient Egypt designed to help travelers get the best out of their visit. In an enthusiastic Foreword, T. G. H. James praises the author for `understanding the needs of visitors’ for guidance in what they will see, and for the background information and confidence in the subject `to make a visit to Egypt a truly enriching experience’. Sounds like the book to recommend to friends going on a `Swan’. Full of color pictures and attractive tinted drawings. Hb, 190pp, 184 illus, 65 in col. (Thames & Hudson, 1987)

6.  Illustration of the king

Amenhotep I, also called Amenophis I, king of ancient Egypt (reigned 1514–1493 BCE), son of Ahmose I, the founder of the 18th dynasty (1539–1292 BCE). He effectively extended Egypt’s boundaries in Nubia(modern Sudan).

The biographies of two soldiers confirm Amenhotep’s wars in Nubia. As shown by a graffito from the seventh year of his reign, he reached the frontier at the Second Cataract of the Nile, probably establishing a frontier farther south on Sai Island. Amenhotep also raided Libya, but no details of the operation are recorded. His only confirmed activities in Asia are the reopening of the mines at Sinaiand the reoccupation of the fortress erected there during the Middle Kingdom (1938–c. 1630 BCE), but there is indirect evidence that he held territory in Syria.

A fine small alabaster sanctuary of the king, as well as a range of smaller chapels, has been recovered at Karnak, and the king’s official in charge of construction credits another temple to Amenhotep. His tomb was probably a rock-cut structure separated from its mortuary temple, a departure from earlier royal practice. He founded the cemetery workers’ village at Dayr al-Madīnah in western Thebes, and in later periods both the king and his mother were worshipped there.

7. Head from Statue of King Amenhotep I 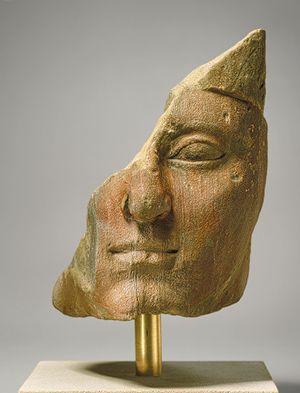 King Amenhotep I, second ruler of Dynasty 18, made his own contributions toward the temple at Deir el-Bahri built by Mentuhotep II at the beginning of the Middle Kingdom. Most notably, he endowed the professional way, along which the god Amun’s image was carried once a year toward Mentuhotep’s sanctuary, with a row of mummiform (Osiride) statues of himself. These statues are remarkable not only for their imposing original height of more than 2.5 meters (9 feet) but also for the individuality of their faces. This fragment of a face with a fleshy nose and split chin comes from an example of the series that is especially artistically refined: a true portrait of an individual person who was king of Egypt. Like some others in the group, the head shows signs that it was damaged in antiquity and later repaired with the help of a dovetail dowel.

The profile of this head is strikingly similar to that shown on a relief depicting the same king (45.2.7). In particular, compare the outline of the nose and the short upper lip which are almost identical in both works (see attached photograph). The similarities in these pieces, one in two-dimensions and the other in three, demonstrate that images of an Egyptian king were probably based on an officially sanctioned likeness that combined recognizable features into an idealized portrait of the monarch in question.

Large numbers of statues of Amenhotep have been found, but they are mostly from the Ramesside period and relate to his continuing funerary cult,[11] made for his posthumous funerary cult.[22] This makes a study of the art of his reign difficult.[22] Based upon his few authentic statues, it appears that Amenhotep continued the practice of copying Middle Kingdom styles.[26] Art in the early 18th dynasty was particularly similar to that of the early Middle Kingdom,[27] and the statues produced by Amenhotep I clearly copied those of Mentuhotep II and Senusret I.[28] The two types are so similar that modern Egyptologists have had trouble telling the two apart.[26]

It was probably Amenhotep I who founded the artisan’s village at Deir el-Medina, whose inhabitants were responsible for much of the art which filled the tombs in the Theban Necropolis for the following generations of New Kingdom rulers and nobles.[11] The earliest name found there is that of Thutmose I, however, Amenhotep was clearly an important figure to the city’s workmen since he and his mother were both its patron deities.[29]

9. X-ray of the actual Amenhotep 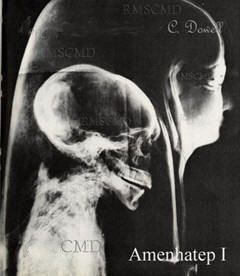 The Pharaohs and Kings did not generally look like the average or common native of the time because of the inherited deformations of their skulls. Some malformations were deliberately induced to signify the difference between royal bloodlines and that of the labor class. Even in this case scenario, if the Sphinx were sculpted to be that of King Khafre of the Old Kingdom’s Fourth Dynasty, in approximately 2500 B.C. –-why would the Sphinx be sculpted to have such an average face and not have a more elongated face or malformed skull and exclude the upper mantle? (Maybe Khafre did have a normal face, but I suspect not.) Many statues and colossi of the Pharaohs do not match their skulls that have been X-rayed. The faces on the statues are completely different than that of the face that would be rectified from the actual skull of that particular Pharaoh or King. The statues are stylized; they do not depict in reality the true faces of many of the mummies that have been found of the royal individuals that have been X-rayed.