The oldest words written down, photographed by the most modern cameras

The planetary deity Venus-Ishtar is also easily identified on Bronze Age Late Babylonian kudurru boundary stones for delineating fields that were annually flooded with new alluvium. For example, this dark limestone archaeological kudurru (ca. 1125 BCE) of Gul-Eresh from the British Museum (see image above and below), [2] where Ishtar (Venus) is an eight-pointed star as part of a sky triad shown left to right along with Sin (the crescent moon here) and Shamash (the sun), the most important astronomical deities as brightest – therefore ruling – sky objects.

King Ashurbanipal was not only a hunter, but also a warrior who conquered Egypt. He took great pride in being able to read and write, at a time when usually only scribes mastered the intricacies of cuneiform writing. He also amassed a huge library of tablets such as this one, which his agents collected throughout the country, especially in Babylonia.

4. THE CUNEIFORM Tablets OF THE OLD MESOPOTAMIA

The first thing to do to understand the meaning of the term cuneiform is to determine its origin and analyze it carefully and investigate its history. Before the year 3000 BC on the banks of the Tigris and Euphrates rivers (Mesopotamia) settle villages of peasants who lived from agriculture and livestock in the quiet lands of Acad and Sumer it is said that the idea was born from the sale of livestock heads how they were counted to sell them to the market and thus the idea of ​​changing the letters arose, in this way of life was the need to keep an accounting of other agricultural products, it is said that the first one of which we have knowledge was called ” cuneiform 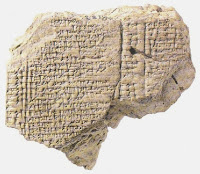 This clay tablet from ancient Babylon describes monthly rations allowed to Jehoiachin, a Jewish king. The biblical account of King Jehoiachin is found in 2 Kings 25:29-30, which also states that he received a “regular allowance” from the king of Babylon. The tablet was made in c. 595-570 BC, and was discovered in Babylon in c. 1900.  The text is in the Akkadian language using the cuneiform script, and the tablet measures roughly 4 x 4 inches. The artifact is now located in the Museum of the Ancient Near East, Pergamum Museum, Berlin.
Image From: bibleandarcheology

Clay cuneiform tablet; letter from Burna-Buriash II to Amenhotep IV or Tutankhamun requesting more gold in the next exchange of presents; 38 lines; divided into 5 sections.

MS in Neo Babylonian on black stone, Babylon, 604-562 BC, stele with rounded top, 47x25x11 cm, the back of the lower 2/3 missing, 3 columns, 3+24+24+24 lines in cuneiform script, to the left: carving of the Tower of Babel from a front view, clearly showing the relative proportions of the 7 stages including the temple on the top; to the right: the standing figure of Nebuchadnezzar II with his royal conical hat, holding a staff in his left hand and a scroll with the rebuilding plans of the Tower (or a foundation nail) in his outstretched right hand; at the top: a line drawing of the ground plan of the temple on the top, showing both the outer walls and the inner arrangement of rooms, including the one that once had a fine large couch in it, richly covered, and a gold table beside it, according to Herodotus : The Histories I:181; on the left edge: another line drawing of the ground plan of the temple. 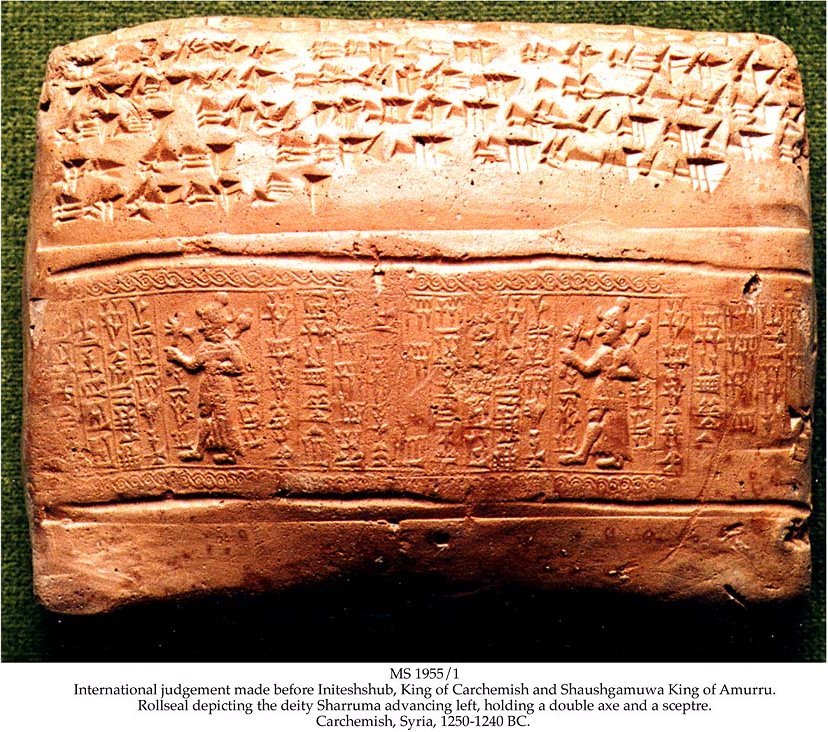 MS in Akkadian on clay, Carchemish, Syria, 1250-1240 BC, 1 tablet, 8,2×10,2×3,2 cm, single column, 15+5 lines in cuneiform script, with seal impression rolled across the whole of the tablet, showing the deity Sharruma advancing left, holding a double ax and a scepter. 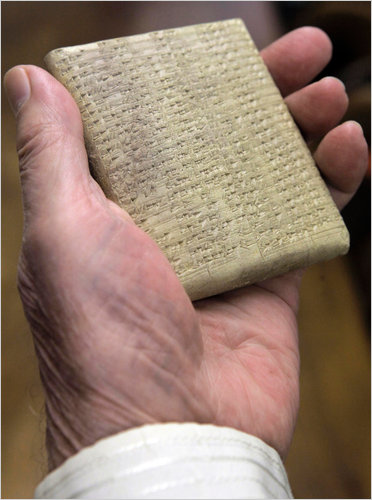 And the dictionary is more of an encyclopedia than simply a concise glossary of words and definitions. Many words with multiple meanings and extensive associations with history are followed by page after page of discourse ranging through literature, law, religion, commerce and everyday life. There are, for example, 17 pages devoted to the word “umu,” meaning “day.” 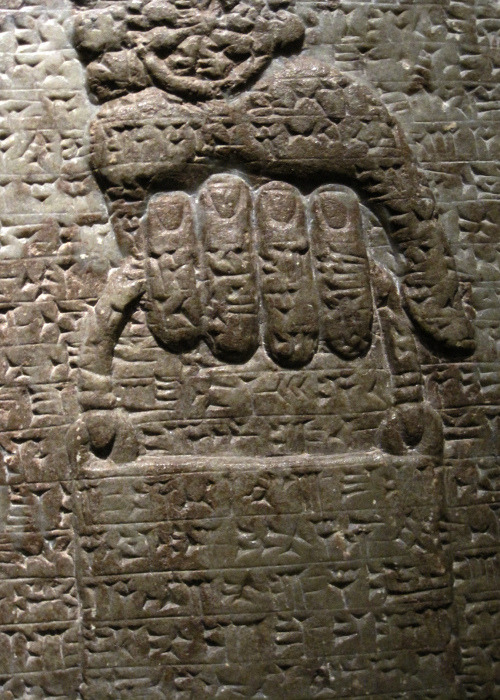 Detail of an alabaster relief depicting a pail of holy water, carried by a winged genie. The relief was unearthed in the Northwest Palace of Ashurnasirpal II in the Assyrian Imperial capital of Nimrud (883-859 BCE). Cuneiform writing covers several parts of the relief. Brooklyn Museum, Brooklyn, NY. 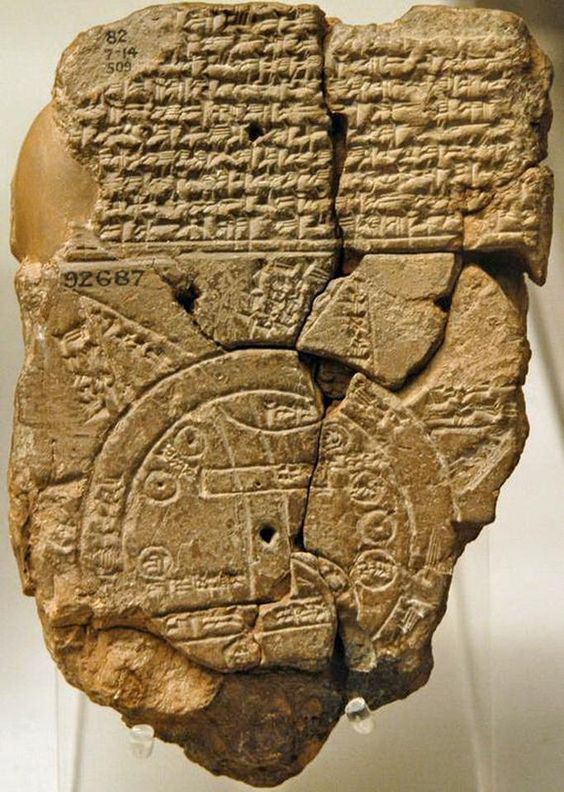 This is one of the oldest maps in the world dating from 2300 b.c.
It shows the city of Babylon on the Euphrates river also showing Assyria and Uratu.

The earliest recorded evidence of the production of soap-like materials dates back to around 2800 BC in Ancient Babylon. A formula for soap consisting of water, alkali and cassia oil was written on a Babylonian clay tablet around 2200 BC. The Ebers papyrus (Egypt, 1550 BC) indicates that ancient Egyptians bathed regularly and combined animal and vegetable oils with alkaline salts to create a soap-like substance. Egyptian documents mention that a soap-like substance was used in the preparation of wool for weaving. Galen describes soap-making using lye and prescribes washing to carry away impurities from the body and clothes. The best soap was German, according to Galen; soap from Gaul was second best. This is the first record of true soap as a detergent.

Hammurabi (ca. 1792 – 1750 BC) united all of Mesopotamia and ruled for forty-three years in Babylon. Although Hammurabi’s Code is not the first code of laws (the first records date four centuries earlier), it is the best preserved legal document reflecting the social structure of Babylon during Hammurabi’s rule. The code contained two hundred eighty-two laws.

Ur-Bau is given as the name of this ruler, but I’d actually differ with the translation on this point, and agree with LoH’s. The inscription’s ba-u is more properly rendered as Baba (better known as Nintinugga), meaning “beautiful woman” and refers to a protective goddess who is also the consort of Ninĝirsu (as it is more properly spelled), the god to whom this temple is dedicated, and so Ur-Baba, meaning “servant of Baba” makes sense as the name of a ruler given this religious context.

These two clay tablets from the Babylonian Collection, inscribed in Akkadian contain the oldest known cooking recipes. They date to ca. 1750 BC, the time of Hammurabi, known for his famous law code. The cuneiform writing system was complex and generally, only scribes who had studied for years could read and write, so it is unlikely that the cookbooks were meant for the ordinary cook or chef. Instead, they were written to document the current practices of culinary art. The recipes are elaborate and often call for rare ingredients. We may assume that they represent Mesopotamian haute cuisine meant for the royal palace or the temple. This stela came from the Temple of Marduk in Babylon. It is a commemorative monument set up in honor of a private individual called Adad-Etir. He was an official in the temple, known as ‘the dagger bearer’, and this stela was erected by his son Marduk-balassu-iqbi. The figures carved in relief on the front represent the father and son together. Their shaven heads show that they are both priests.

Upper part of a clay tablet, 3 pieces, beginning of obverse and the end of reverse are wanting, astrological forecasts, a copy of the so-called Venus Tablet of Ammisaduqa, Neo-Assyrian. ~ Description extract from BM record. It is ascertained that the library burned in a fire during 612 BC when Nineveh was destroyed. However, in the fire were preserved the tablets for the next two millennia until their rediscovery in 1849.

The oldest known dictionaries are cuneiform tablets from the Akkadian empire

with bilingual wordlists in Sumerian 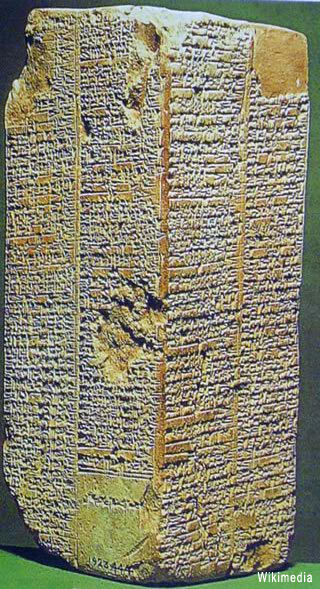 Out of the many incredible artifacts that have been recovered from sites in Iraq where flourishing Sumerian cities once stood, few have been more intriguing than the Sumerian King List, an ancient manuscript originally recorded in the Sumerian language, listing kings of Sumer (ancient southern Iraq) from Sumerian and neighboring dynasties, their supposed reign lengths, and the locations of “official” kingship. What makes this artifact so unique is the fact that the list blends apparently mythical pre-dynastic rulers with historical rulers who are known to have existed. 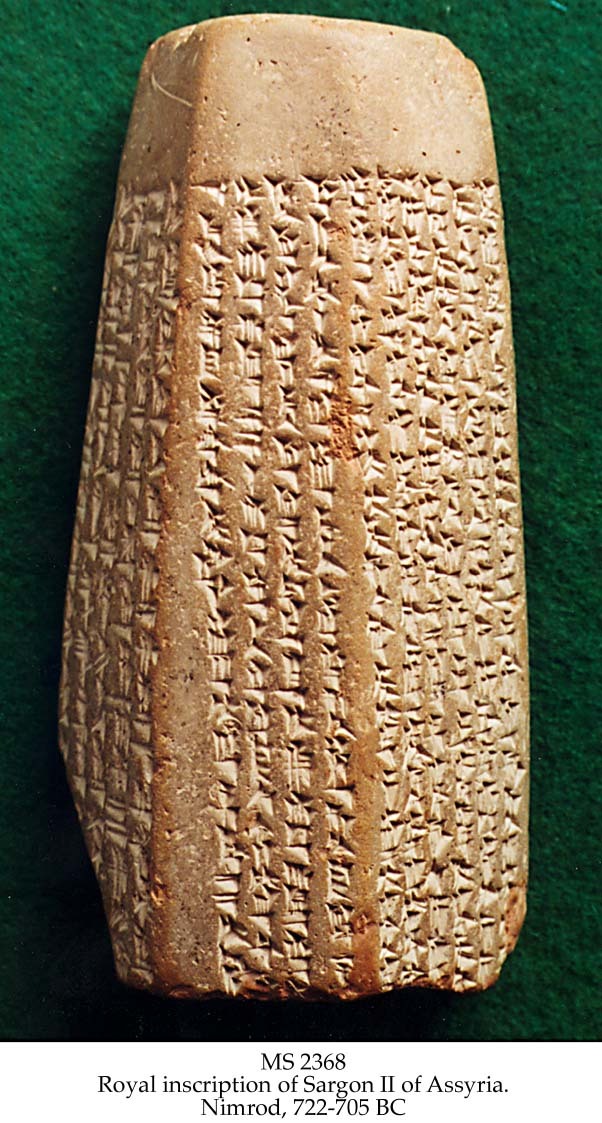 ROYAL INSCRIPTION OF SARGON II OF ASSYRIA, DESCRIBING HIS CONQUESTS GENERALLY, MENTIONING: BIT-HABAN, PARSHUMASH, MANNAEA, URARTU; THE HEROIC MAN WHO DEFEATED HUMBANIGASH, KING OF ELAM; WHO MADE THE EXTENSIVE BIT-HUMRIYA (HOUSE OF OMRI) TOTTER, THE DEFEAT OF MUSRU IN RAPIHU; BOUND TO ASHUR, WHO CONQUERED THE TAMUDI; WHO CAUGHT THE IONIANS IN THE SEA LIKE A BIRD-CATCHER; ALSO BIT-BURTASHA, KIAKKI AND AMRISH, THEIR RULERS; WHO DROVE AWAY MITÂ (MIDAS), KING OF MUSHKU; WHO PLUNDERED HAMATH AND CARCHEMISH; GREAT HAND CONQUERED, THE DEVASTATOR OF URARTU, MUSASIR; THE URARTIANS BY THE TERROR OF HIS WEAPONS, KILLED BY HIS OWN HANDS; WHO DESTROYED THE PEOPLES OF HARHAR, WHO GATHERED THE MANNAEANS, ELLIPI; WHO CHANGED THE ABODE OF PÂPA, LALLUKNU; WHO FLAYED THE SKIN OF ASHUR-LÊ’I, THEIR GOVERNOR; WHO IMPOSED THE YOKE OF ASHUR ON SHURDÂ; FROM MELIDU, HIS ROYAL CITY; THE FEARSOME ONSLAUGHT, WHO HAD NO FEAR OF BATTLE, –

Cyrus, King of the Medo-Persian Empire, is among the most important foreign rulers of the Israelite nation. In fact, many Old Testament prophecies revolve around this monarch. The prophet Isaiah documented that the Babylonian Empire would fall to the Medes and the Persians (Isaiah 13; 21:1-10). Not only did Isaiah detail the particular empire to which the Babylonians would fall, but he also called Cyrus by name (Isaiah 44:28; 45:1-5). Amazingly, Isaiah’s prophecy was made roughly 150 years before Cyrus was born (Isaiah prophesied in about 700 B.C.; Cyrus took the city of Babylon in 539 B.C.). To add to Cyrus’ significance, Isaiah predicted that Cyrus would act as the Lord’s “shepherd.” In fact, Isaiah recorded these words of the Lord concerning Cyrus: “And he shall perform all My pleasure, even saying to Jerusalem, ‘You shall be built,’ and to the temple, ‘Your foundation shall be laid’ ” (Isaiah 44:28).

He tried to reduce the differences between social classes, reduced taxes, tried to cancel prerogatives that had been attributed to the monarch and his family, reduced abuses by officials, prohibited the exploitation of the lower social strata, canceled debts, fought corruption and issued the first legal code recorded by history. Although its text is not yet known, it is known from references and quotations found that the Urukagina Code granted tax exemptions to orphans and widows; forced the city to pay the expenses of funerals; decreed that the rich should pay their purchases with silver to the poor and forbade them to sell. He also abolished the ancient custom of polyandry in his country, punishable by stoning 1

The sun god and god of justice of Sumer was Utu (also known as Shamash).  Brother of Inanna and Dumuzi just as Apollo was a brother to Aphrodite and Dionysus, his description matches that of the Greek god Apollo.  He was the lawgiver as well.

Image from: the library kids

30. Restoration of a temple document

UNSPECIFIED – 1901: Ancient brick of Kurigalzu, king of Babylon, recording the restoration of and ancient temple of Nannar, the Moon God, in the city of Ur. (Ca. 1400 BC) (Photo by Mansell/Mansell/The LIFE Picture Collection/Getty Images)