The Thomas Jefferson of Ancient Mesopotamia 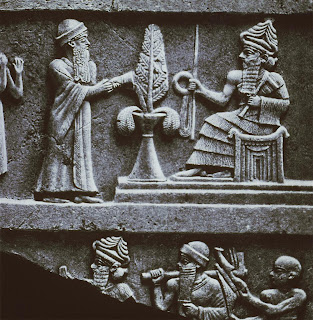 Another example of a god interacting with a mortal can be seen on the Code of Hammurabi where Hammurabi stands before Shamash, in this stele Shamash hands over to Hammurabi the authority and power to rule over the people of Babylon. Perhaps people were instructed to believe that disobedience to their king, equal disobedience to the gods.

The Code of Ur-Nammu is the oldest written code of law ever to be found. The tablets, written in Sumerian, were inscribed at some point between 2100 and 2500 BC. To put that into perspective, these laws were written at a time when The Great Pyramid of Giza was shiny and new, and the last few mammoths still roamed free on Wrangel Island. The creation of these laws predates the hit TV series Judge Judy by a good 3,500 years.

The Sumerian King Ur-Nammu(seated), the creator of the Code of Ur-Nammu, bestows governorship on Ḫašḫamer, ensi of Iškun-Sin (cylinder seal impression, ca. 2100 BC).
Image From: Wikipedia
4. Clay tablet bearing the name Ur-Nammu The cuneiform inscriptions on this tablet mention the name of Ur-Nammu, king of Ur and founder of the Sumerian 3rd dynasty of Ur. From the temple of Inanna at Uruk, southern Mesopotamia, modern-day Iraq. Neo-Sumerian period, 2112-2095 BCE.

The Ur-Nammu law code is the oldest known, written about 300 years before Hammurabi‘s law code. When first found in 1901, the laws of Hammurabi (1792-1750 BC) were heralded as the earliest known laws. Now older collections are known: They are laws of the town Eshnunna (ca. 1800 BC), the laws of King Lipit-Ishtar of Isin (ca. 1930 BC), and Old Babylonian copies (ca. 1900-1700 BC) of the Ur-Nammu law code, with 26 laws of the 57. This cylinder is the first copy found that originally had the whole text of the code, and it is the world’s oldest law code. Further, it actually mentions the name of Ur-Nammu for the first time.

In his book From the Ashes of Angels Andrew Collins talks about Sir Charles Leonard Woolley’s discovery of the mound settlement of Tell al-Ubaid some four miles to the north of the city of Ur that was the home of Abraham and his family. Collins mentions that, “There is every reason to suggest that these people were the distant ancestors of the much troubled Marsh Arabs of modern-day Iraq.”  These modern-day marsh Arabs referred to are none other than the Mandeans who are mentioned in other of my posts, and as stated, John the Baptist was a Mandean.

8. Performance in front of Ur-Nammu Its two faces are covered by reliefs organized into five friezes. In this image we see the obverse, in the first frieze, the king appears – under the astral symbols of Sin and Shamash – presented before the gods Sin and Ningal. In the second, Ur-Namu celebrates a double ceremony before the same deities enthroned. In the other three, scenes of the construction process of some religious temple. Musicians, sacrifices, and adorations appear on the back.

Ur-Nammu, founder of Sumerian Third Dynasty of Ur (c. 2100 BC), Metropolitan Museum of Art (New York)